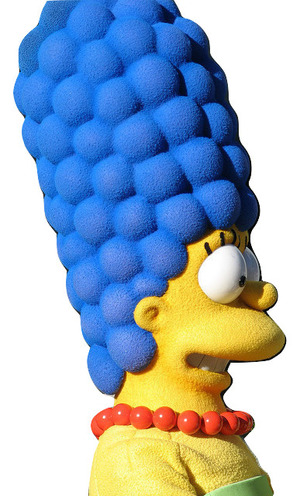 Marge was born with grey hair (“Grey as a mule since she was seventeen”). Out of shame as a child, her parents began to dye her hair blue and she’s kept it that way. Homer speaks about this to his class in the episode “Secrets of a Successful Marriage” (S5, ep 22). Therefore her hair is actually gray as hell, it’s just died blue.

Also, there is an episode ( The Blue and the Gray S22, ep 13) where she gets it re-dyed, despite sisters. Marge goes to the haircut place because she discovers her “first grey hair”. It was her first grey hair… it’s just that her hair was dyed on the outside but her hair is grey on the inside! Eventually, Marge dyes her hair color back to blue.